Reduce the costs of pumping and the risk of damage

Air trapped in completely filled pipelines is basically undesirable. Even if air does not get into the pipeline during filling, small gas bubbles (air, carbon dioxide etc.) are also formed during operation. Little by little, these can then merge to form larger bubbles and rise to the top. As a result, they then collect at high points in pipelines and form air cushions there. The consequences can vary considerably:

For drinking water pipelines there are descriptions e.g. in DVGW data sheet W 334 of how accumulations of air can cause considerable dynamic pressure changes as a result of the different densities of the two media.

The commissioning of a pipeline represents a special case. Directly after construction, the whole system is filled with air and must first be filled up with a liquid. Attention must be paid to the following here: if, when filling pipelines, air is expelled via vent valves, the filling speed must be kept as low as possible. The dreaded pressure surge (Joukowsky surge), which occurs if the float of the vent valve closes the valve seat abruptly at the end of the filling process, must remain below the admissible pressure load (PMA = maximum pressure occurring temporarily, including pressure surges, which a part of a pipeline in operation can withstand) of the pipeline. As a rule, the admissible pressure surge is limited to 3 bars for safety reasons. The filling speed is limited to 0.25 m/s in accordance with DVGW data sheet W 334.

In order to secure the pipeline against inadmissible pressure fluctuations for problem-free operation then, depending on the operating state, ventilation or air release is necessary for the pipeline components. The gas bubbles trapped in pipelines reduce the free cross-section available for flow, increase the pressure loss in the pipeline and in some cases cause undesirable pressure surges. The size and number of vent valves is to be determined according to the nominal size of the pipeline, the filling volume, the topography and the maximum permissible air speed in the narrowest cross-section of the vent valve (main venting).

Ventilation and air release valves are generally installed in shafts or buildings. They can also be arranged on pipelines which run above ground. However, there are also designs of ventilation and aeration fittings which are suitable for installation underground.

Ventilation by automatic vent valves is necessary in the following cases:

Air release is not necessary in normal network operation. Even with long-distance pipelines, no forced air release is necessary if the speed of flow is sufficient, even when the pipeline is on a downward gradient, to carry the air bubbles with it. In cases where disruptive accumulations of air can form, automatically acting air release valves are to be provided. Air in water pipelines is mainly to be expected in places where certain conditions arise such as pressure reductions and temperature increases.

Most designs are based on the float principle, with and without lever reinforcement.

Smaller volumes of air which can occur during normal operation are taken away via the operational vent section.

With aeration and air release valves with a lever function, valves are opened and closed by a lever in the components; depending on the application, different construction forms are used. 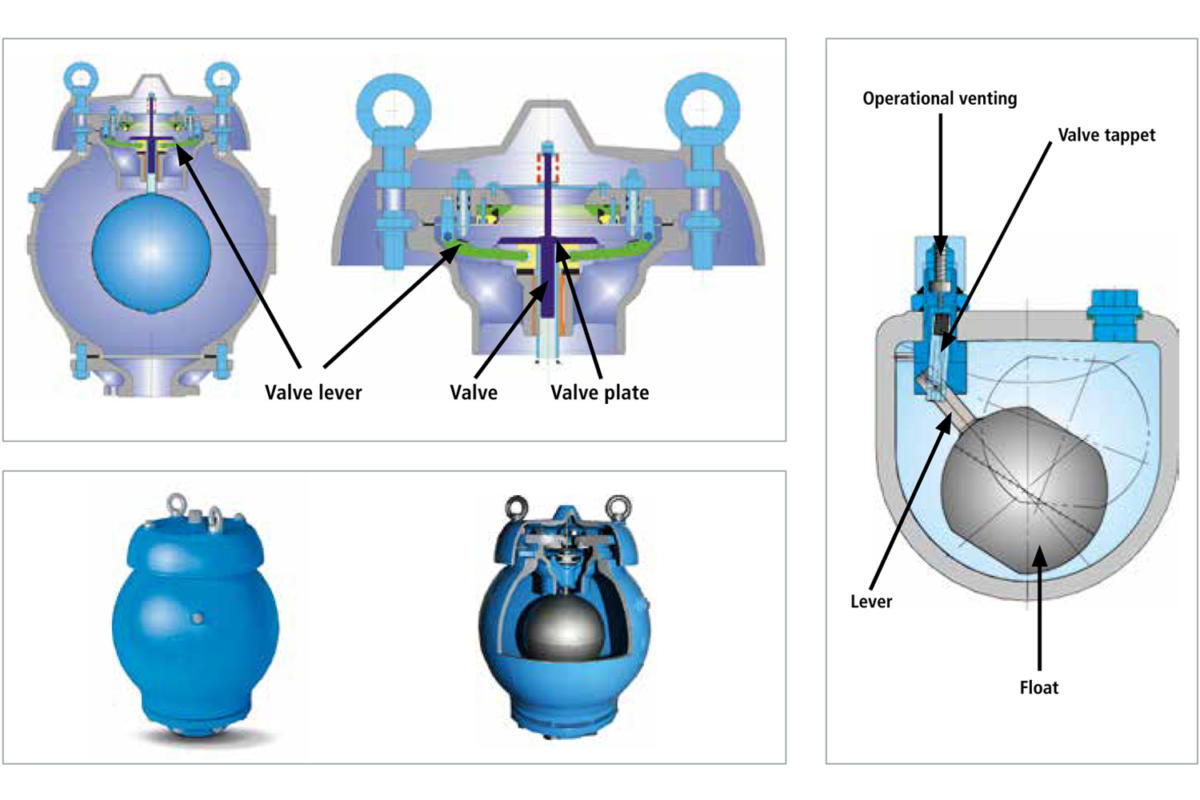 Different construction forms of aeration and air release valves with lever function. Top left: sectional view of a single-chamber valve with valve lever for small and large volumes of air; bottom left: aeration and air release valve with lever function for wastewater pressure pipelines; right: The illustration shows operational air release. The float is attached to a lever. A valve tappet on the lever closes the air release port under positive pressure. With negative pressure, the float drops and the port is opened. Air can escape.

In addition to the construction forms described above, particular types of design have been developed for operational reasons. Dynamic pressure brakes are used in order to protect aeration and air release valves from pressure surges. There is a shut-off body mounted in the valve housing which can be moved by the flow. When a certain flow speed is exceeded the medium pushes the shut-off body into the valve seating. Only a reduced cross-section remains free.