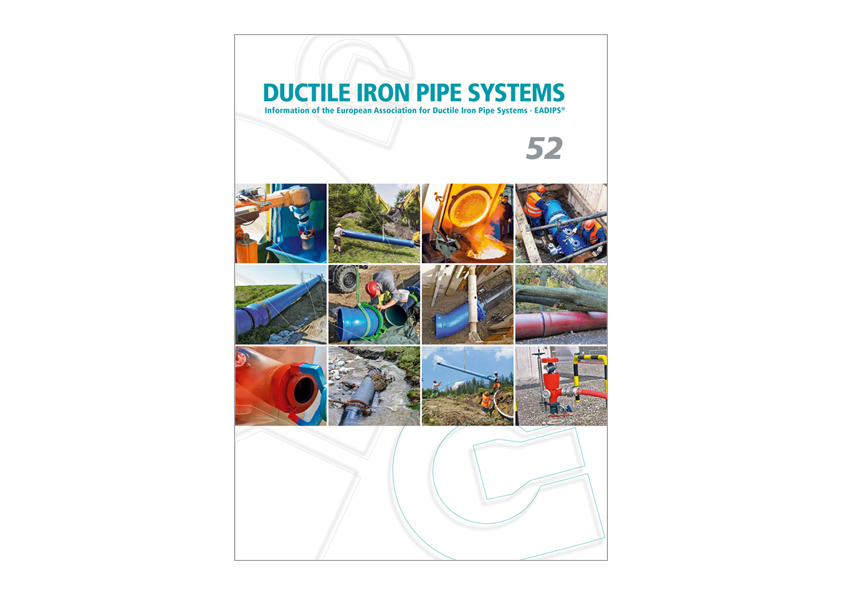 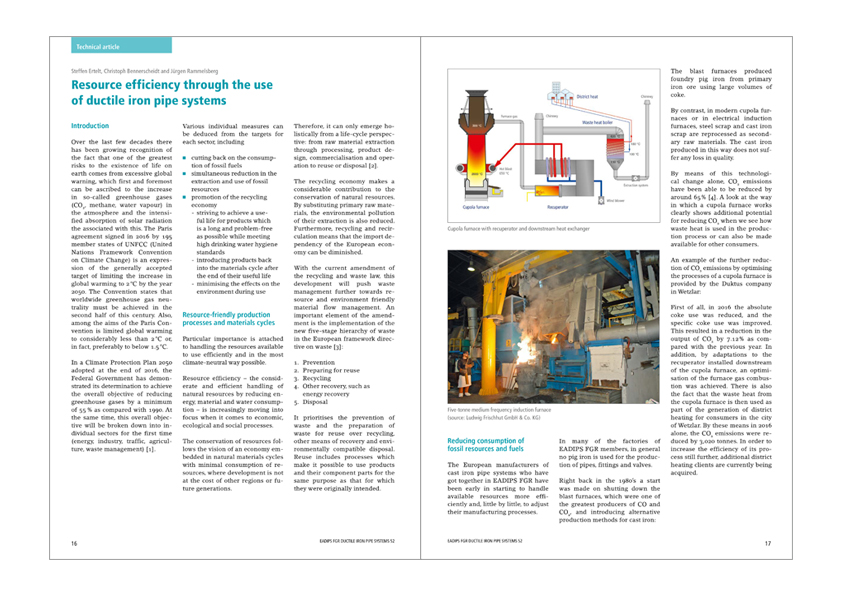 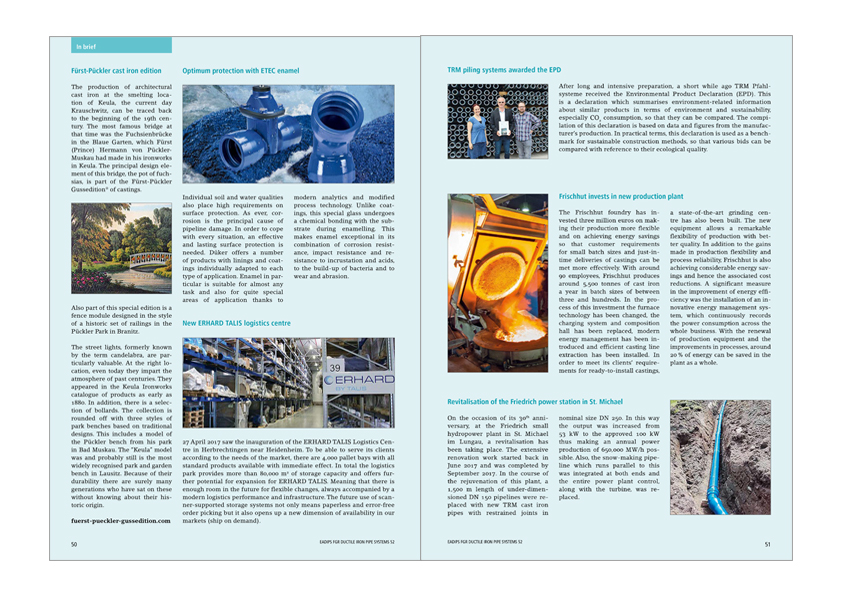 Send yourselves free of charge a printed copy of the topical Annual Journal of EADIPS FGR.

Annual report for 2017 and outlook for 2018
by Manfred Künze

For the first time, the board of EADIPS FGR is publishing an annual report with an outlook for the coming business year of 2018 in the Annual Journal. It outlines the structure of the Association with full members and sponsoring members and, in addition to public relations and standardisation work, it highlights the most important areas of activity for its own projects and
development targets:
– digitisation in the water supply industry,
– measures for adapting to climate change (soil-pipe system) and
– even more efficient handling of resources.
These areas of activity are all interlinked and need to be developed further on both technical and political levels.

Resource efficiency through the use of ductile iron pipe systems
by Steffen Ertelt, Christoph Bennerscheidt and Jürgen Rammelsberg

The significance of climate change for life on earth is largely undisputed. Activities on a worldwide basis to slow down the rise in temperature involve decreasing global pollutant emissions and reducing the extraction of fossil resources from the earth’s crust. In turn, this is associated with an altered behaviour as regards consumption and use, tending more towards a longer working life and a strengthening of the recycling economy. With reference to the production and use of ductile iron pipe systems, this article describes the efficient conservation of natural resources.

With its e-book “Cast iron pipe systems – pipes, fittings and valves in ductile cast iron”, EADIPS FGR offers planners, users and instructors an extensive and constantly updated compendium of ductile iron pipe systems. The chapter on valves is so extensive – because of the multitude of constructions and tasks – that it was a good idea to present the group of hydrants in its own, slightly abridged version in the Annual Journal.

Corrosion protection is one of the top priorities for valves and fittings in ductile cast iron: it is a basic requirement for the hygienic and problem-free transport of drinking water, it makes installation possible in all types of soil and it preserves the material against chemical attacks of all kinds. Here again, some fundamental developments have made their mark in the recent past. Of greatest importance here are Fusion Bonded Epoxy coatings. This article first looks at the production of the coating powder from raw materials and the complicated approval procedures involved and then examines the meticulous pre-treatment of components and the entire coating process. This forms the basis for high-quality coating.

Digitisation in the water supply industry
by Frank Endreß

In all areas of life, the economy and society, there is currently a trend towards comprehensive digitisation; this is also the case with the water supply industry. It began a few years ago with the changeover from manual to digital reading of meters and progressed to remotely readable meters, the remote measurement of the water status throughout the network of pipelines and the remote measurement and digital inclusion of correlation measurements in the pipeline documentation in order to detect leaks. A further trend concerns the traceability of all components installed in a pipeline network. The long-term aim is the cross-linking of autonomous structures, sequences and processes

In the water supply industry, it is often necessary for sections of network to be able to be inspected, repaired or renovated without interrupting supplies for any length of time. A remedy for this is the construction of a so-called interim pipeline, which temporarily takes over supply until the original section of pipeline can be put back into operation. If space permits, the pipes of the interim pipelines are laid in the open on the ground and so need to be protected against the forces acting on them. Ductile iron pipe systems have proved to be particularly good for this purpose because they are robust and can easily be dismantled and reused on the next section to be worked on. There are various systems of restrained joints available for them, which are also easily and simply dismantled again. After a review of some previous projects, the article describes an interim pipeline which was needed during the renovation of a sewage pressure pipeline in Berlin. This was an exemplary illustration of the robustness of the pipes: even an old oak tree thrown onto the pipeline during a storm could not cause any discernible damage.

It has been 50 years since Reinhard Schaffland wrote the first article on the history and classification of “ductile cast iron”, which was a recently developed material at the time. In those days people were still looking for appropriate processes for testing this material because the known and proven methods used for grey cast iron did not adequately describe the plastic ductility capabilities of the new material. The ground-breaking boldness with which this new technology was being pushed forward is quite astonishing: the first major project was a 100 km long high-pressure gas pipeline, 10 years before this!

Loose-flanged butterfly valves for a perfect fit
by Matthias Müller

In general plant construction, the use of valves with flange connections is customary; they come in standardised lengths and should therefore be relatively easy to exchange for maintenance or repair purposes. Unfortunately, however, things are not quite so simple in practice: the compaction of the flange seal means that the old fitting can only be removed with force or by using special tools. And the installation of an identical valve of exactly the same length and the usual flange seals becomes almost impossible because of the lack of axial play. When installing a new valve into a pipeline which is already laid, the clearance between the existing flanges is made up with dismantling joints. The loose-flanged butterfly valve is an elegant way of overcoming the problems described.

In the Swiss canton of Obwalden, the structure of the water supply system to a number of communities is being improved. This involves the construction of new supply pipelines and reservoirs. At the same time, the considerable height difference in the pipeline network is going to be used for producing electricity via a new drinking water turbine: another example of resource efficiency in practice with the help of ductile iron pipes which, with their robust external protection, allow the stony excavation soil to be reused and avoid the need for transporting bedding material.

Alpine country, with its steep slopes and enormous height differences, holds great potential reserves for the production of renewable energy with small hydropower plants. The penstocks are often exposed to extreme stresses from the external conditions of the terrain and from the weather. Particularly severe rain conditions can inundate the pipelines and the bedding on which they are based can often be washed away. Power failures and costly repairs are the consequence. This article examines the frequency of damage with restrained and non-restrained pipelines. The clear result is that pipelines with restrained joints survive severe weather without major damage. The insurance industry provides contractual conditions in which the premiums for restrained pipelines are lower.

For technical reasons alone, the construction of a
DN 500 penstock in this rough and steep terrain is a challenge which only a few construction companies are capable of meeting. But, also to be considered here were environmental requirements set by the approval authorities and a time window which made construction work even more difficult. This article describes the complete agenda of tasks to be fulfilled by the construction team: steep slopes, rough terrain, the crossing of a mountain stream, extremely tight working space, protection against rockfalls and so on. Using ductile iron pipes with restrained joints this whole set of problems can be handled in the most economical way. In the end, the Luggauerbach power plant will be producing around 4 GWh of clean energy in a normal year. This will enable about 1,000 average households in Gastein to be supplied and around 3,400 tonnes of CO2 emissions to be saved each year.

This article looks into the complex inner workings of an essential control valve – the plunger valve. As an all-rounder, the plunger valve fulfils key functions in equipment and transport pipelines: it acts as a shutoff valve, a regulating valve, a check valve, a safety valve and a measurement device. The optimisation of this proven construction is based on many years of practical experience. Among other things, this relates to materials which allow a long and problem-free working life. Flow simulations point the way to the further improvement of flow coefficients. Construction details and coating materials guarantee the highest standards in drinking water hygiene. Once again, we can see that nothing is ever so good that it cannot be improved.

Reservoir replacement at Gönhard in Aarau
by Roger Saner

Changes in the conditions of the drinking water supply in Aarau, Switzerland, meant that its structure needed to be altered. The key element in this project was the construction of a new central drinking water reservoir and the decommissioning of three existing tanks which were too small. This resulted in some extensive changes to the existing pipeline network. This article focuses on the construction of a new DN 400 transport pipeline in ductile iron pipes with integral polyurethane coating and lining.

A disused industrial zone with an area of 22 ha in the vicinity of Solothurn, Switzerland, is being developed for new establishments for the pharmaceutical industry. In addition to the building of roads, the entire infrastructure of pipelines is also to be laid – while the construction of the production and administration buildings is in progress. Because of the increased water requirement involved in bio-pharmaceutical production, the entire water procurement system from the wider surroundings is to be restructured at the same time. The installation of the approximately 2.5 km long pipelines for the supply of drinking and extinguishing water in the DN 125 to DN 400 range with pipes, fittings and valves in ductile cast iron with modern corrosion protection technology (polyurethane) is described in detail in this article.