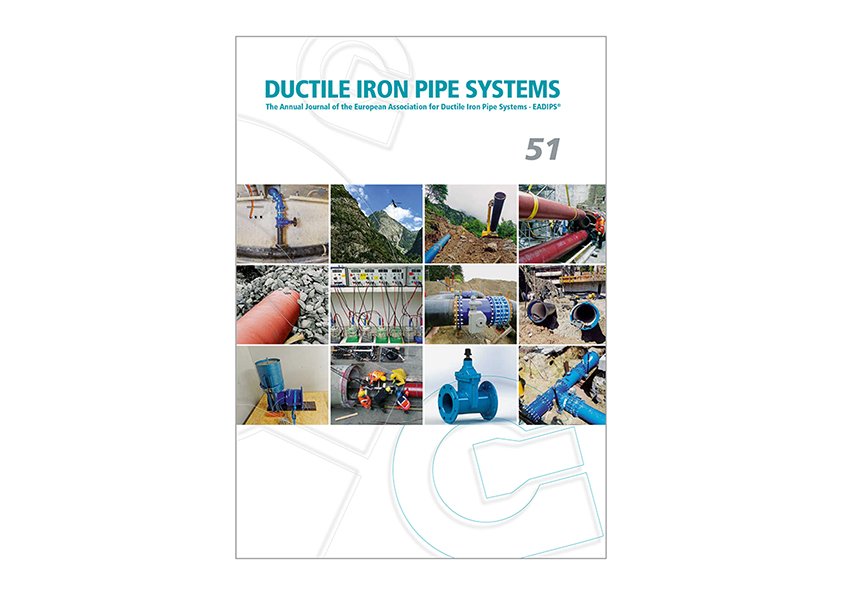 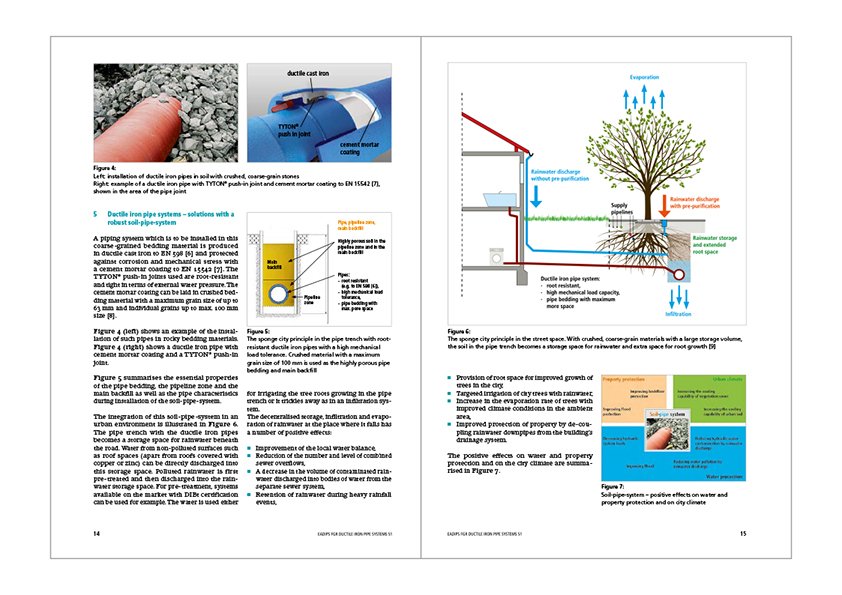 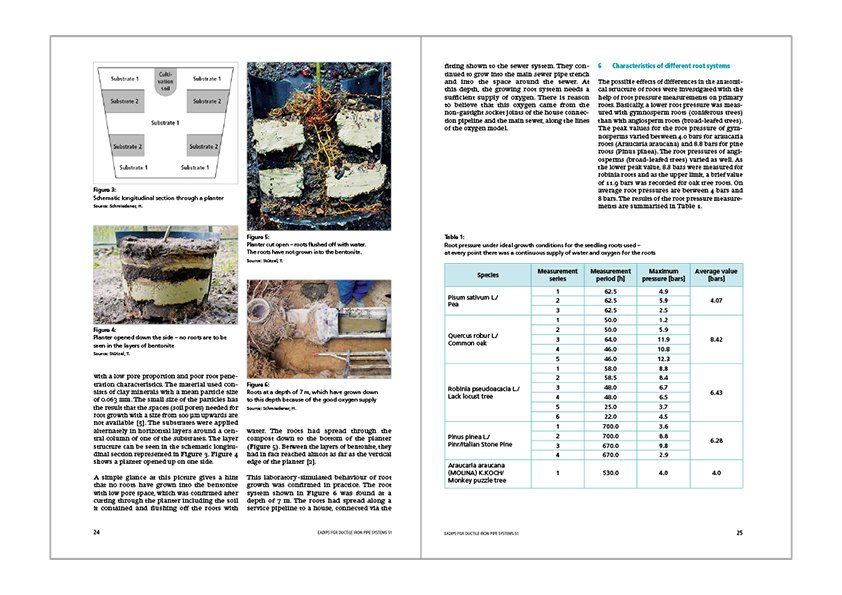 In our latitudes, climate change is having an increasing impact with summer overheating and heavy rain events, sometimes with a cata-strophic character. If the underground pore space of the bedding of sewers could be used as a transitional storage space for floods of rain and if this water could also be made available to city trees and hence evaporated, then this would be killing two birds with one stone. One precondition for these sewage systems is having pipes which are extremely mechanically robust, which can cope with a bedding consisting of sharp-edged coarse material with a grain size of 100 mm and which are root-proof. Ductile iron pipes with cement mortar coating are the key to this solution.

When even more infrastructures have to be installed in the already intensively occupied depths beneath our large cities, then these projects become ever more expensive and complex and mutate into economic and technical heavyweights. The proportion of material costs to the project as a whole becomes increasingly lower, while the requirements for operational reliability over extremely long working lives increase. Ductile iron pipes are the first choice when it comes to building a complicated wastewater transport system in groundwater under immense constraints from adjacent structures. Exciting reading, even for old hands!

For decades now, the interaction between tree roots and piping infrastructure has been a matter for discussion between pipeline operators and those in charge of parks and gardens. A special case is the penetration of roots into pipe joints which, in the worst cases, ends up with a blocked or leaking pipeline. While it was previously thought that hydrotropism was the common cause, where the root tends to grow towards water, this meant that there already had to be some slight leakage. But research results over the last 15 years have shown that the availability of oxygen due to insufficient contact pressure of the sealing element is the true cause of root penetration. This has led to specific requirements for push-in joints for sewage and water pipes, which are increasingly being reflected in product standards.

The development of the epoxy resin powder coating of ductile cast iron fittings and valves is a success story, particularly because, from the start, consistent attention has been paid to meeting the highest demands. This contribution gives a summary of state-of-the-art technology. It covers the polymerisation chemistry of epoxy resin, the production and processing of powders, proving the corrosion protection effect by numerous test methods, as well as a description of its suitability in terms of drinking water hygiene, with a glance at national and European regulations. Anyone who wants to have more than a superficial idea of this technology will find an answer to the most important questions here.

A large city with heavy traffic loads and the simultaneous extension of its tramline system: here the highest requirements are set for the longevity of the pipeline infrastructure. Valves and fittings in modern cast iron materials with integral corrosion protection give the operator a guarantee of a long working life, with the lowest maintenance budget.

Nothing is so good so that it cannot be improved upon a little more. This well-known saying be-
comes even truer when there is close coopera-
tion between the manufacturer and the user of a product. The development of new production technologies and new materials is something which is closely monitored by the manufacturer, while the user comes up with desires and comments from his day-to-day operation. This information is brought together in the manufacturer’s development department and so a constant flow of innovations results. The new INFINITY gate valve is an eloquent example of this!

The transport of drinking water to the highest hygienic requirements, only to be expected in the future, using piping material which is exposed to very aggressive bedding material – this is where enamelled fittings and valves come into their own. The active involvement of an operator with his suppliers in optimising components is an essential condition for the high level of quality of our drinking water. Valves which are enamelled inside and outside offer a guarantee of an extremely long working life, with maximum performance in terms of drinking water hygiene.

Our drive for innovation is optimisation
by Ursula Ritter

Nothing is so good that it cannot be improved in the small details! This conclusion by the author is directed precisely at the reasons why many of our medium-sized companies across the world are seen as “hidden champions”. Their close connection with the perceptions of their clients, produces innovation for the benefit of the client as well as renowned market leadership. In the world of valves there is a constant flow of optimisations, whether in the material, in the coating, or in construction. Nothing less will do if
a company is to succeed in global competition.

The intended European unification of national regulations with respect to public health and consumer protection touches also elastomeric seals in contact with potable water. The former existing requirements for migration of certain substances from the elastomer to the potable water are replaced by positive lists which contain toxicologically assessed and permitted materials to produce sealing gaskets. The possibilities of the gasket manufacturer are hereby constricted because the seal has also to comply with additional mechanical and technological requirements to achieve the intended long term function (leak tightness). It is again here where we can observe a steady evolution.

Extinguishing water piping systems in all types of constructions have a curious job specification: they should need to be called on as little as possible but they must always operate reliably throughout the entire working life of the construction. When it comes to extinguishing water systems in transport tunnels, there are further requirements to be met: non-combustibility of components, permanent protection of interior and exterior surfaces, ease of assembly in tight space conditions and several more. Ductile cast iron extinguishing water systems in transport tunnels have a long tradition because they meet the whole set of requirements in an ideal way, as can be seen in this case with the construction of a new motorway tunnel in Switzerland where, as we know, the highest safety requirements prevail.

With ski tourism as an essential economic factor and with the shorter, milder winters caused by climate change, the requirement for high-pressure pipelines is increasing in skiing resorts. Ductile iron pipe systems with their secure, easily assembled push-in joints, their extremely high pressure loading capacity and their full range of fittings and valves rank as favourites among planners and operators of snow-making equipment.

In alpine terrain, considerable potential remains slumbering despite the extensive use of hydropower resources. The article describes the design and construction of a small hydropower plant with a geodetic elevation difference of almost 1.000 m in the Ticino. Increasing efforts are being made to ensure that the infrastructures are integrated into the natural mountain area as inconspicuously as possible. Penstock pipelines made of ductile iron pipe systems are hidden in broken stone walls.

It is true that necessity is the mother of invention! When constructing small hydropower plants in Alpine areas, unexpected problems often arise which have to be solved by the planners. With the help of ductile iron pipes and fittings and with the backup of a competent team of workers, such difficulties can be overcome in many cases. The only possible route for a planned turbine pipeline is down a slope where the soil is unstable. Specially developed expansion fittings, each with a permissible extension of 80 cm, take the edge off the problem.

Proven over the years and described again and again, ductile iron pipe systems simply cannot be beaten for the construction of power plant pipelines! Difficult, inaccessible terrain with its rocky ground, demanding conditions in terms of technology and safety standards, additional requirements set by the environmental agencies, all these things and more mean that every power plant pipeline is its own individual task. Add the fact that made-to-measure adapter pipes with special requirements for restrained locking and corrosion protection need to be delivered to the site without delaying construction progress, then the pool of experience of all involved in the project becomes indispensable. The construction of the penstock pipeline for the Bristen power plant is a successful example of this.