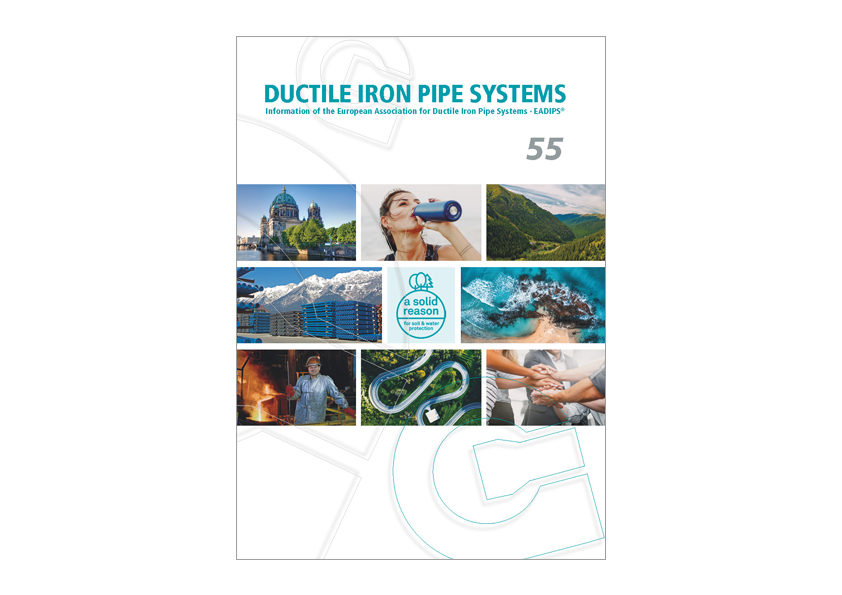 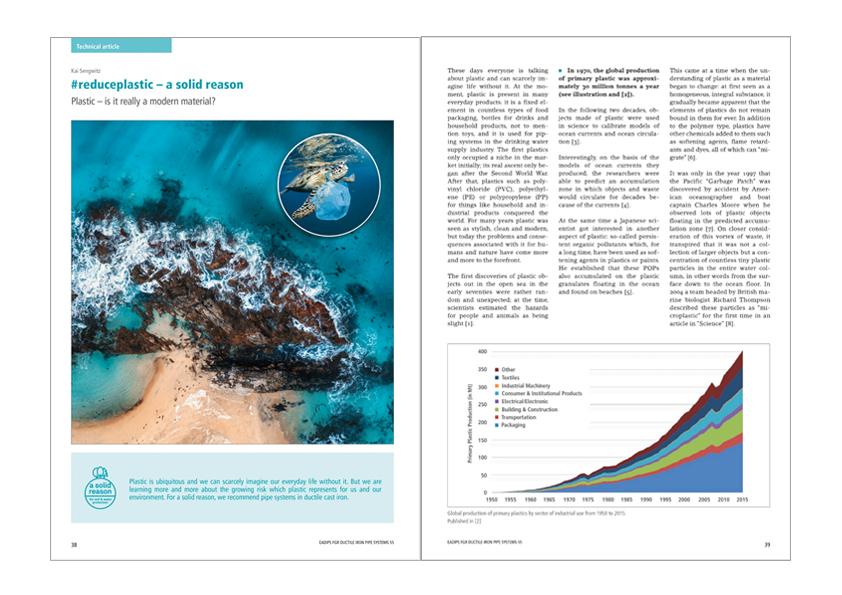 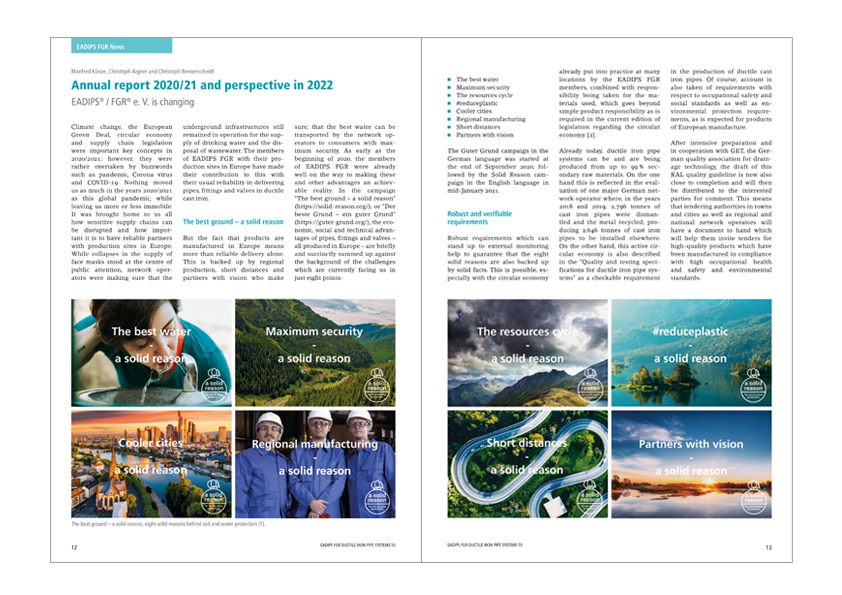 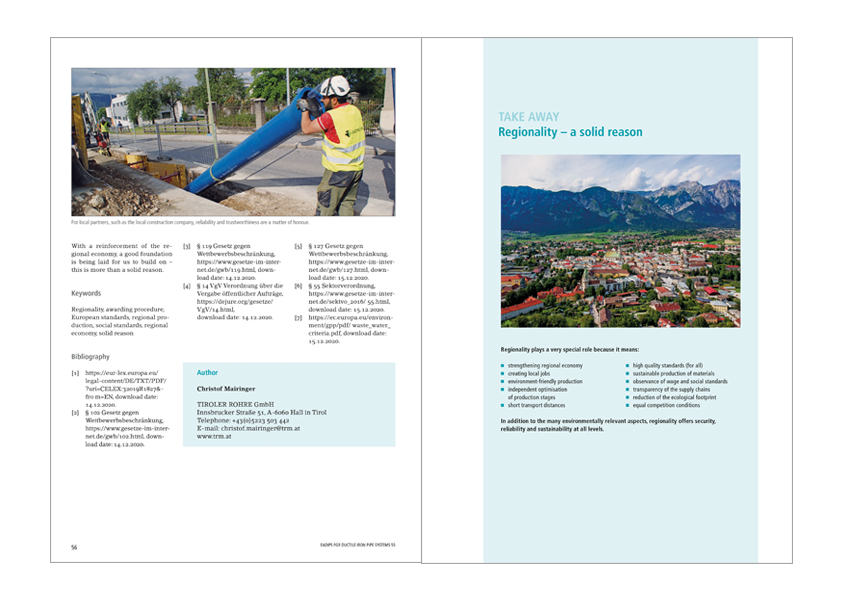 Send yourselves free of charge a printed copy of the topical Annual Journal of EADIPS FGR.

Annual report 2020/21 and the perspective in 2022
Manfred Künze, Christoph Aigner and Christoph Bennerscheidt

In the past two years, the keywords climate change, the European Green Deal with its transition to a modern, resource-efficient and competitive economy, and the Supply Chain Act have dominated our daily lives; they were and still are accompanied by the global Covid 19 pandemic, which shows us how fragile our world is. The members of EADIPS FGR have responded to the demanding challenges of the future with, among other things, the initiative launched in 2020, “Der beste Grund – ein guter Grund” respectively “The best ground – a solid reason”, and have presented the advantages of ductile iron pipe systems one can touch.

In cooperation with the GET, the draft of the RAL quality guideline is now also close to completion. So that in future cities and municipalities as well as network operators have an instrument at hand with which they can invite tenders for high-quality products that have been produced in compliance with high occupational health and safety and environmental standards, the RAL Quality Guideline Ductile Iron Pipe Systems, which is about to be finalised, can be used.

With the announcement of the European Green Deal in December 2019, the pressure is also increasing to continue on the path we have taken to reduce CO2 emissions in order to produce in a CO2-neutral manner by 2040. Accompanying national and international works on rules and regulations, the joint projects on digitalisation and resource efficiency were also an important part of the association’s activities in 2020/2021. To adapt to the effects of climate change, the BMBF-funded project “BoRSis – soil-pipe system as an innovative element of climate-adapted urban drainage” started on 1 October 2021, developing the sponge city solution using ductile iron pipes.

It is precisely because drinking water is the most strictly controlled commodity for human consumption that we are able to drink it direct from our taps without concern. The purchase of water in plastic bottles is therefore obsolete and a burden on the environment, as can be seen from the volumes of plastic waste in our oceans. This approach is resolutely pursued in Switzerland and Liechtenstein in that expensive bottled water is no longer sold in restaurants, public drinking fountains, major events etc.; instead the considerably cheaper tap water is served. Part of the money saved is donated for charitable purposes.

In cases where people want to carry their daily ration of drinking water with them, there is the original resealable glass bottle, also targeted at minimising the use of plastic bottles. These bottles can act as promotional items and are completely recyclable, in just the same way as the ductile cast iron pipe systems which transport the drinking water from the waterworks to the consumer. Thus there are two inorganic materials which are making the transport and consumption of drinking water extremely sustainable.

For those of us in Central Europe it is taken for granted that, with a high degree of certainty, we can draw clean, hygienic drinking water from our taps at all times. However, scarcely anybody is aware of the technical and administrative effort which this involves. Manufacturers of pipes, valves and fittings have been working together with the water suppliers for decades in order to enshrine the desired properties of the system components in standards and specifications. With pipes and fittings, this is comparatively simple, but with valves the moving parts in different materials must work together with the same objective: maximum reliability in service and problem-free operation over decades! It takes the experience and know how accumulated over decades in order to be able to meet these security requirements.

The “European Green Deal” focuses attention on the resource-conserving recycling economy, so that CO2 emissions can be reduced in the foreseeable future to the extent that the 1.5  °C target can still be reached. Ductile cast iron pipe systems have already been taking this approach for decades: the raw material from which they are produced is, to the greatest possible extent, scrap metal which is supplied by an established scrap collection and trading system. Depending on the melting plant available, almost 100  % of the material used consists of iron and steel scrap. The melting process eliminates impurities, the finished cast iron product is always as good as new and no deterioration in quality occurs in the recycling. The article also shows how, by continual stages of optimisation, the use of primary energy can also be reduced and the residual heat occurring in the foundry can be used to useful and efficient effect. The reduction in CO2 emissions is considerable.

Plastic plays a prominent role in our daily lives. As the mountains of rubbish increase across the world, the risk for nature and the environment is becoming ever more apparent. At the end of the useful life of articles made of plastic comes incineration, euphemistically described as thermal reutilisation – there is no “cycle” in the same sense that there is with metals. To begin with there is crude oil, produced from natural deposits, and at the end there are millions of tonnes of CO2 which end up in the earth’s atmosphere, where they remain with the known consequences. Things are different with metals: an established scrap economy ensures continuous recycling, for example of scrap steel and iron, from which pipes, fittings and valves in ductile cast iron can be produced time and time again without any loss of quality. With modern coatings and linings, these systems have useful lives of 100 years and more, which meets the challenge for sustainability. Also the damage rates with these systems are lower than with “modern” plastic piping systems. This raises the question of whether the traditional material, i.e. cast iron, is not in fact more “modern” as compared with plastic.

Climate change is definitely something which can no longer be denied! Extreme weather conditions have been increasing for years now: extended spells of hot weather as well as torrential rainstorms have been afflicting our towns and cities in particular. Many large, stone-built edifices as well as road surfaces made of asphalt and concrete heat up during the day and can no longer cool down sufficiently at night. When severe rainfall events occur, the sewer system beneath these sealed surfaces is unable to deal with the resulting flash floods. Underground stormwater retention basins are only part of the solution to the problem as it takes time for the rainwater to get to the receiving structures and it is not available to the urban trees. There is simply not the space in the inner-city environment for extensive soakaways and tree irrigation troughs.

For some time now, the phrase “sponge city” has been catching on: green roofs and the greening of facades could take up some of the rainwater and store it for a time, from where it will evaporate through the plant surfaces and produce a cooling effect. But the greatest impact can be achieved if the pipe trenches in our roads, which are necessary anyway, are backfilled with coarse-grained material, thus providing linear storage spaces through which the roots of roadside trees can penetrate. Ductile iron pipes combine the advantages of “robustness” and “root resistance”, and they form the basis for an interdisciplinary R&D project with the participation of local authorities, universities, construction companies and pipe manufacturers. The project was launched on 1st October 2021.

Durability has always been a feature of ductile iron pipe systems. In addition to the increasingly urgent demands for CO2 reduction which we are facing, there are also the questions of recyclability and regionality – both of them challenges which the ductile iron pipe systems manufactured by the European members of EADIPS meet utterly and entirely. Regionality is also supported by EU public procurement law, as was demonstrated by the example of the construction of a pipeline in the town of Hall in Tirol: local construction contractors and locally produced pipes were sound partners for the local supply company.

Regionality is a buzzword which is increasingly gaining in importance, not simply when buying fruit and vegetables in the supermarket but also in the design, development, production, sale and use of complex piping systems for the water industry. Avoiding the emissions caused by long transport distances, proximity to the user, reliability in consultation – these are advantages of inestimable value when you have your suppliers close at hand. The “short distances” motto applies at all levels, for example when sourcing raw materials: scrap metal for the production of the ductile cast iron; in product development: suggestions from users for optimising components; with construction site support: providing assistance and consultation. The advantages of short distances and the disadvantages of long supply chains – sometimes extending into other continents – are becoming more and more apparent.

There is a huge task facing us all: climate change is compelling us to heal the planet for our descendants while at the same time laying the foundations for their wellbeing. As a partner with vision, the foundry industry is pursuing a number of routes in order to achieve this target:

Perfecting the circular economy for materials and doing away with the use of primary raw materials as far as possible.

Cast iron metallurgy allows the repeated smelting of scrap iron and steel without any loss of quality. Modern electric melting technology can reduce the CO2 emission to as little as 10% of the former level.

With the formulation of the RAL Quality and Testing Provisions for Ductile Iron Pipe Systems, the European manufacturers of pipes, fittings and valves have committed to the high social and occupational safety standards applicable in Europe, thus pointing the way to a modern, resource-efficient and competitive economy.

The supply of drinking water to a city such as Berlin with over a million inhabitants places extreme demands on the pipe material, and the same applies to sewage disposal. The immense growth in car and GV traffic puts particular stress on the infrastructure beneath the streets. So it is not surprising that Berliner Wasserbetriebe only allows the most robust of pipes to be laid – the ductile cast iron pipe.

This article describes the latest state of the art in Berlin, from pipe-laying in open trenches to new builds and renewals using trenchless installation techniques. A further facet is the construction and operation of interim pipelines above ground running parallel to pipelines which have to be renovated. The pipes in the interim pipelines are subject to specific loads and, once dismantled, they can be used again at other locations. The top priority in the choice of pipe material is durability and for the time needed for assembling and dismantling the pipe connections to be as short as possible, as there is simply no time for lengthy road closures in busy urban areas.