Positive locking and flexible thrust-resistant systems have extended the range of application of ductile cast iron systems and shown that they can withstand all loads produced by internal and external forces. In the construction and during the operation of pipelines with restrained joints in tunnels and under bridges, when used with the application of trenchless installation techniques and when laying in open trenches, the planning engineer is working in the realm of generally accepted codes of practice.

Interim pipelines are also constructed using thrust-resistant ductile iron pipes. They are not makeshift measures but offer transitional or workaround solutions for an urgent engineering problem: by using them, supply or disposal can be ensured over limited periods while sections of pipeline are being repaired or newly constructed. Generally speaking, interim solutions have to secure problem-free continued operation even under changing operating conditions.

The construction and operation of interim pipelines have sufficiently proved themselves in practice; they were planned individually and were achieved successfully and to the satisfaction of the clients. Building on this, Berliner Wasserbetriebe is preparing the draft of a works standard so that interim pipelines will soon be able to be planned and constructed according to generally accepted codes of practice.

In its investment planning up to the year 2023, Berliner Wasserbetriebe is directing its main focus on sewage disposal and especially on the replacement of pressure pipelines, which will be reflected in very high investment costs. In inner-city areas, large-dimension pipelines in particular mean that planning and execution are faced with big challenges if disruptions are to be kept as low as possible. In addition to new constructions with steel and cast iron pipes, renovation procedures will also be used. The choice of material and construction process and coordination with all relevant legal entities is a prerequisite for a successful construction project. In addition to implementation according to engineering standards, the chosen construction project must also represent the best option from the point of view of costs.

In the Berlin district of Pankow, in Hermann-Hesse-Straße, an old DN 1200 grey cast iron pipeline was to be replaced along the same route by new ductile cast iron pipes of the same nominal size. To do this, it was necessary to set up a 378 m long emergency or interim pipeline with ductile iron pipes above ground along the central reservation (parking strip) between the traffic lanes of Hermann-Hesse-Straße. To achieve this, clearance had to be secured for execution with at least one side of the street being able to take traffic (one-way traffic regulation).

In addition, the measures taken had to consider the interests of a hotel, a children’s nursery and a school. This meant that the school bus and delivery vehicles had to have access to certain areas of the closed carriageway for short periods and a corresponding stopping point had to be set up for the bus. The interim route also had to be culverted to make it possible to drive over it.

Despite the stable and robust pipe material and the thrust protection, a pipeline laid above ground along with its components must present a high level of security against external mechanical stresses (vehicle accidents, vandalism, fire control or falling trees and branches) and guarantee safe operation. A careful risk analysis had to be carried out. 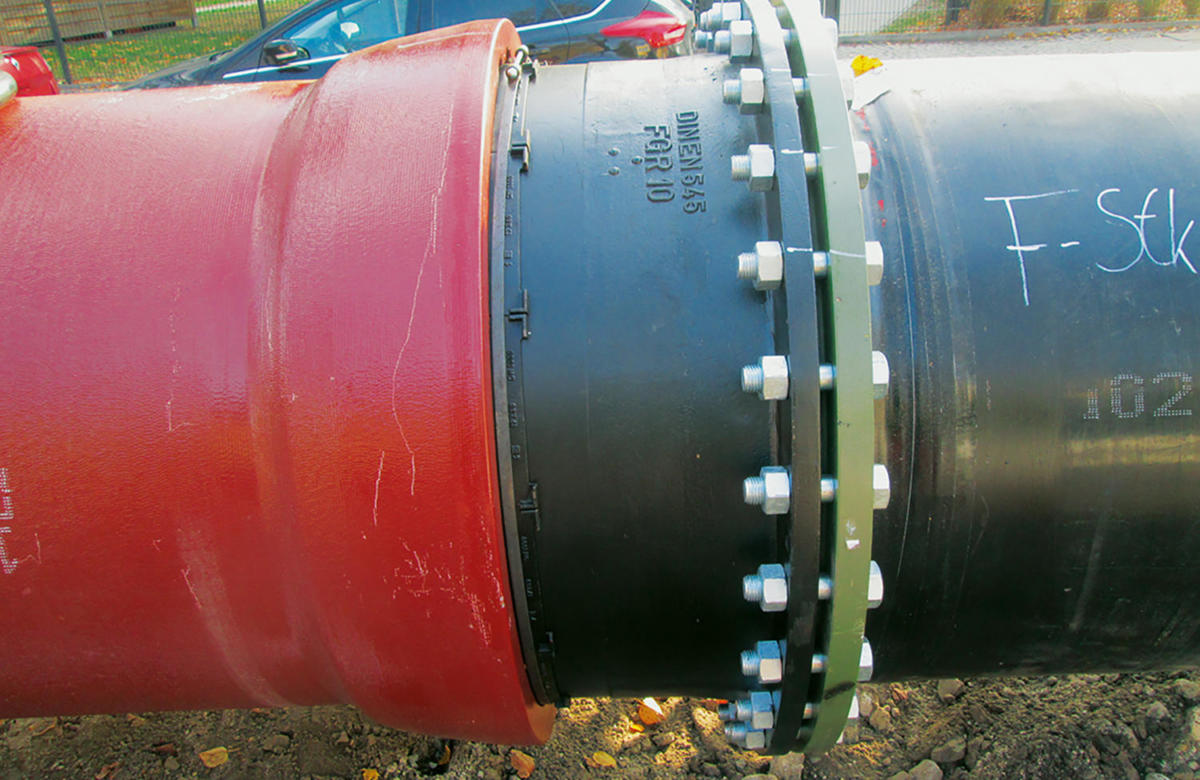 For the construction of the new sewage pressure pipeline, it was planned to use DN 1200 thrust-resistant cast iron pipes. For the interim pipeline, DN 1000 thrust-resistant cast iron pipes to EN 598 with BLS® push-in joints for easy assembly and dismantling were selected. Being a temporary measure, this reduction in dimension was justifiable. The ductile material of the pipe is impermeable and it is sufficient to provide a bracket or the corresponding saddle as a support every 6 m in the socket area.

For cast iron pipelines laid above ground it is obligatory to use a positive locking thrust protection system as friction-type thrust protection systems, such as TYTON SIT PLUS®, only offer the corresponding guarantees for installation underground. Regardless of the length of the section of pipeline, it is also basically necessary that each push-in joint is resistant to tensile forces.

It was precisely the ease of handling, secure operation and ease of assembly and dismantling which were decisive as regards the use of ductile cast iron pipe systems. Their 6 m length makes the pipes easy to transport and install.

It is clear that, as compared with welded steel pipelines, installation using the push-in joint saves a considerable amount of time, in contrast to welds and the subsequent corrosion protection which they need. Separating welded steel pipelines when dismantling them afterwards also takes time and is associated with real nuisance factors (noise, dust, smell) for the surrounding area. The dismantled pipes can be used again multiple times without problem. The cast iron pipes are robust and joined together every 6 m by the flexible restrained joints.

For changes of direction in the area of the route and for the culverts (making it possible to drive over the pipeline) the client decided to opt for welded steel pipe sections which have been joined to the pipeline using fittings (flanged spigots and flanged sockets) from the full BLS® range.

Completion made to measure

Hardwood cradles were used to support the interim pipeline. The upper part was designed as a saddle with a steel sheet strip inserted in it as a kind of bearing so that, in case of any longitudinal expansion, the saddle could not tip over. Beneath the wooden elements, a square, 1 cm thick steel plate was applied to the subgrade to distribute the load.

The pipeline was installed along precisely straight lines, both horizontally and vertically. The weight of a DN 1000 pipe when completely full is 4.7 tonnes with a permissible tractive force for the BLS® push-in joint of 1,560 kN. The pipes were then assembled according to the manufacturer’s specifications by means of chain hoists, with the BLS® segments in the crown of the pipe being plugged into the windows of the the socket face, distributed around the circumference and then moved along. The position of the BLS® segments is additionally secured using fixing brackets supplied to the site.

After assembly, the joint has to be stretched by jacking (or with a hydraulic ram) between the socket face and the bracket of the assembling tool so as to reduce possible subsequent longitudinal expansion to a minimum, but also to exclude any excess stretching of the pipe string during pressure testing.

Once the pipes had been assembled, the sections of pipeline underwent pressure tests using fittings, which were the same as the fittings required for assembly. Tightness testing of pressure pipelines laid above ground has two purposes:

–   the final stretching of the restrained joints,
–   at the same time, to provide evidence of the integrity and tightness of the pipeline.

Because the pipeline is laid above ground, the highest safety levels must be guaranteed for construction personnel and the surrounding environment. Subsequent operating conditions will rely on these pressure testing parameters and thus be safeguarded.

Once the replacement DN 1200 pressure pipeline was commissioned, the interim pipeline was able to be dismantled and taken away.

As regards time taken, handling characteristics, sustainability (they can be reused and are environmentally compatible) as well as security during operation, ductile iron pipe systems with BLS® push-in joints are the best alternative for the construction of interim pipelines. The corresponding technical rules and regulations are being prepared by Berliner Wasserbetriebe; they also contain theoretical principles for planners.