Interim pipelines in ductile cast iron are the best

When supply pipelines or sewage systems still in operation need to be replaced, renovated or even repaired, the engineering involved for ensuring a secure supply or disposal service in the meantime is not to be underestimated. In branched local networks supplying drinking water, the section concerned can usually be closed off and the water diverted away from the area affected by a bypass. But shutting down and diverting is often not possible, and pipelines laid below ground (e.g. in gravity sewers) or above ground, referred to as “flying” or interim pipelines need to be constructed so as to be able to continue transporting the media in question while the work is being carried out. 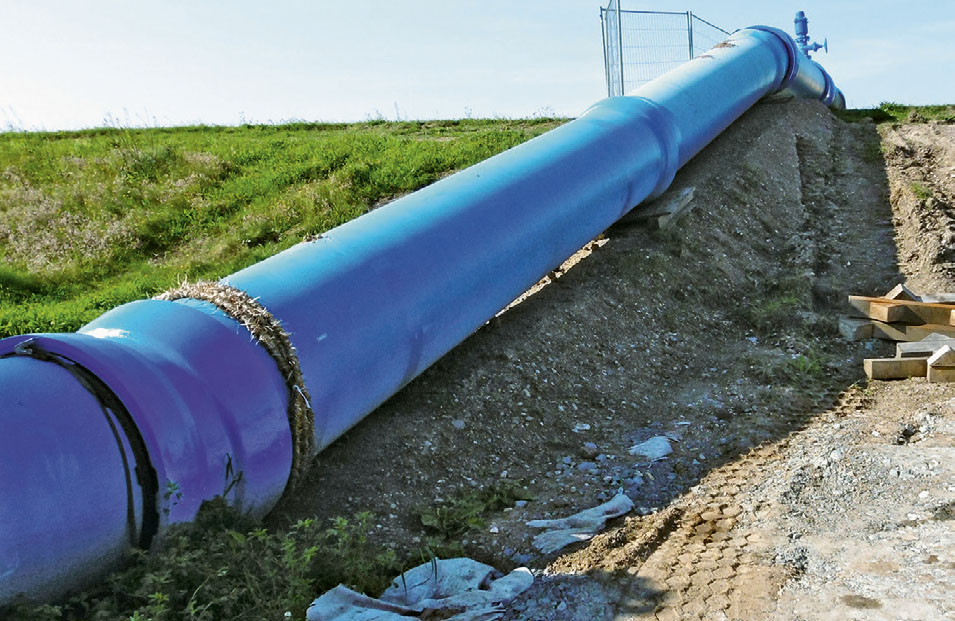 To date there are no generally applicable requirements for the planning, construction, operationand deconstruction of interim pipelines, meaning that as a rule technical solutions have been worked out as each individual case arises. Information on the construction of pipelines above ground and on special requirements for piping systems constructed above ground can be found in DVGW W 400-2, chapter 15.2, EN 805, chapter 5.4 (protection of systems) and in the draft of prEN 598. Basically, the requirements described there are to be observed when planning interim pipelines.

But also, different network operators have many years of experience in the use of ductile iron pipe systems as interim pipelines which can be drawn on in order to formulate requirements for interim pipelines.

Interim pipeline between the Canitz waterwork and a pipe bridge

The section of the double transport pipeline to be renovated is located between the pipeline junction at Thallwitz/Canitz in the immediate vicinity of the Canitz waterworks and a pipe bridge over the River Mulde. At this point the pipelines run underneath the flood prevention dike. The first step was to construct a DN 800 interim pipeline with BLS® push-in joints between the Thallwitz/Canitz junctions and the pipe bridge and put it into operation. Then this new pipeline was put into operation and the interim pipeline was decommissioned. The pipes and fittings of the interim pipeline were then used again so that the second DN 1000 could be renovated.

Renovation of a wastewater pressure pipeline in Berlin Tegel Forest

No disruptions in operation occurred throughout the entire construction phase. Also the construction and dismantling of the pipelines was, as usual, uncomplicated, however, in 2017 the Berlin city area experienced the effects of local bad weather events on many occasions. Heavy rain resulted in flooding and squalls took away roofs and uprooted trees and dozens of trees were uprooted in Jungfernheide Forest and a decades-old oak fell onto the interim pipeline. Once the oak had been removed from the pipe-line then, as expected, it was seen that the pipeline in robust ductile cast iron had withstood the powerful impact of the tree without damage. There were not even any detectable alterations to the surface of the pipe. 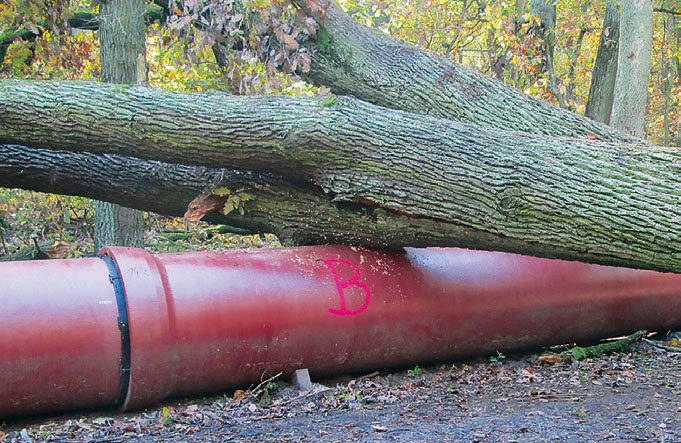