In the winters of the 1980’s when snowfall was low, the need grew for snow-making facilities in the Alps. The operators and planners of snow-making equipment were in search of a robust, reliable and easy-to-handle piping system which could withstand pressures of up to 100 bars without problems. These criteria were – and still are today – met by ductile iron pipe systems with restrained push-in joints. Tiroler Rohre GmbH ventured into the area of snow-making equipment as early as 1986. But even now, 30 years later, the extension and renovation of the snow-making equipment in the Alps is still forging ahead. This is illustrated by two current projects in the districts of Seefeld and Ischgl in the Tyrol, where ductile iron pipes with BLS®/VRS®-T socket joints from Tiroler Rohre GmbH are being used.

Guaranteed snow for the Nordic Ski World Championships in 2019

It was in 2014 that Seefeld in the Tyrol was named – for the fourth time – as the venue for the FIS Nordic Ski World Championships (FIS – Fédération Internationale de Ski). The snow-making equipment is already being expanded so that, in just two years’ time, snow is guaranteed for the great event. Particularly impressive here is the construction of a new snow-making reservoir on the Gschwandtkopf, which forms the basis for a seamless cover of snow for the entire cross-country skiing trail. For filling the storage reservoir, for the reservoir piping system and for distributing the water to the snow cannons, around 3,300 m of ductile iron pipes in nominal sizes DN 80, DN 200, DN 250 and DN 400 from Tiroler Rohre GmbH are used. In June 2017, construction work was started on the conversion and extension of the infrastructure of the snow-making equipment. The construction project will be completed in the next few months in order to be able to offer the athletes a taste of what is to come in the 2019 World Championships at the forthcoming cross-country skiing events such as the FIS Race, the Kaiser Maximilian Lauf, Austrian Championships and the “PRE WSC”. 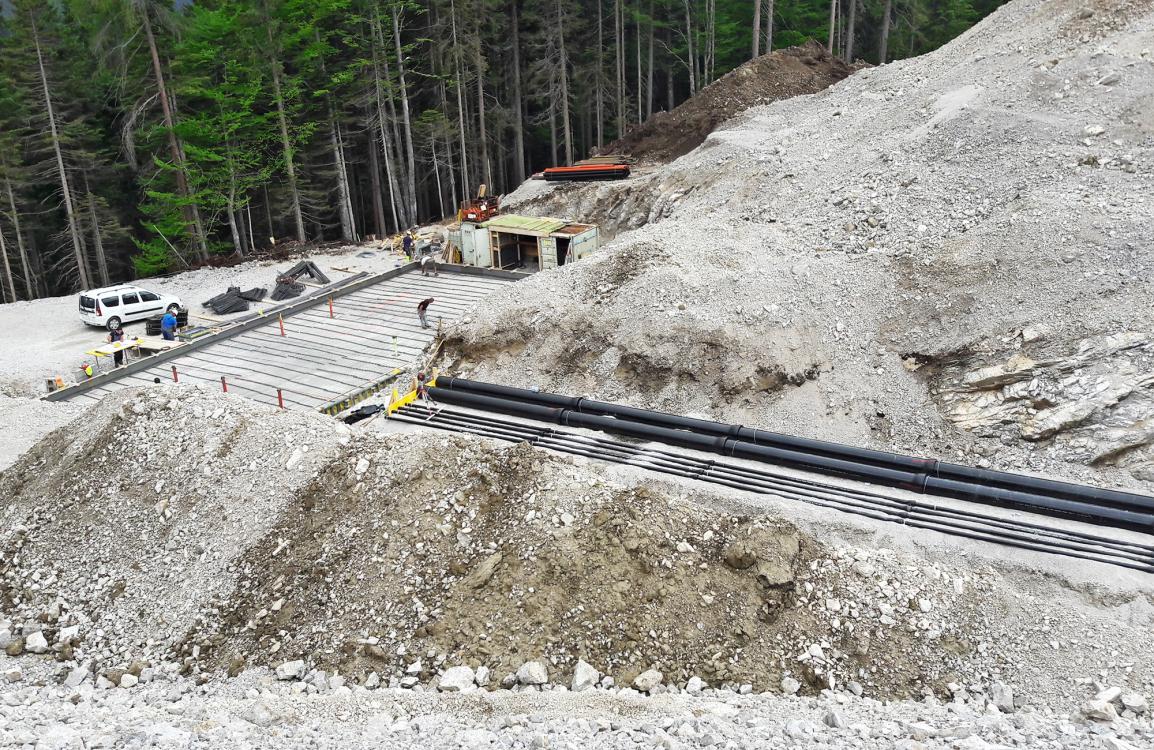 Figure 1:
Filling and take-off pipelines to the future pumping station 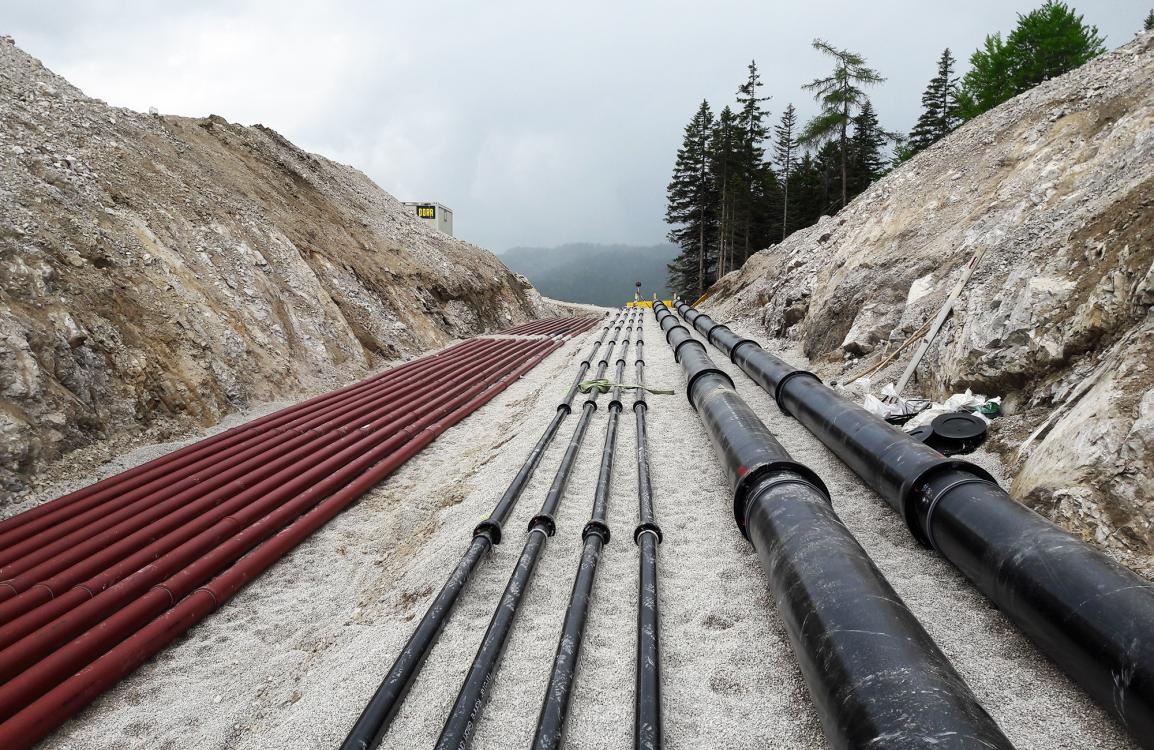 Figure 2:
Filling and take-off pipelines to the snow-making reservoir

In the ski resort of Ischgl, more than 2,300 m above sea level, work was started on the new Viderböden storage reservoir in May. The construction site is also referred to as a “heart transplant” as the very heart of the snow-making system – the reservoir lake – has to be completely relocated.

Figure 3:
Panoramic view of the major construction site around the new Viderböden storage reservoir in the ski resort of Ischgl, Tyrol

The location of the existing reservoir, including the upper and above all the lower slope, is constantly moving and the authorities withdrew their approval for its operation as from the end of the 2016/17 winter season, which is why it was necessary to look around for a new location. This had to be as close as possible to the former site so that the pipelines could be connected up without having to run long distances and so that the water could be taken from there and supplied to the widely branching network of the existing system without undue excavation work.

The connection of the new central location to the existing snow-making system will be made possible with pipes from Tiroler Rohre GmbH in nominal sizes DN 80, DN 150, DN 200, DN 250, DN 300 and DN 400. The “Operation” costing around € 4.5 million should be completed in the next few months so that the snow-making equipment is functioning and ready to go by the start of the skiing season. 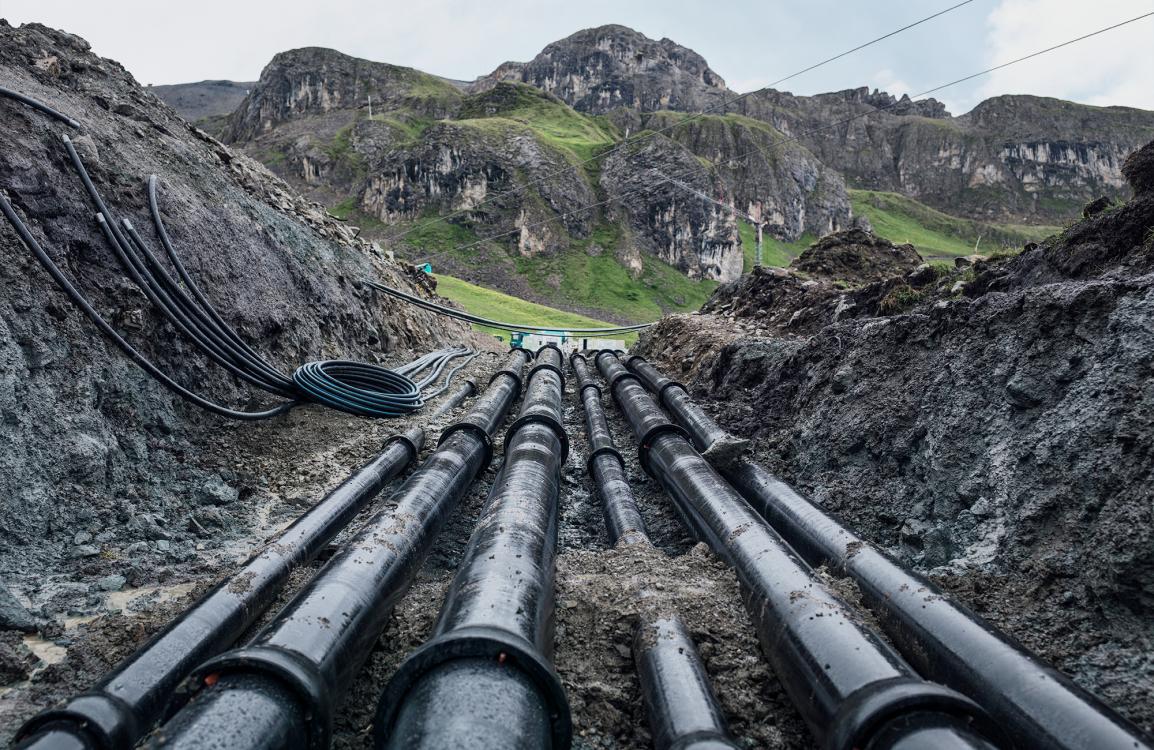 Figure 4:
Installation of the filling and take-off pipelines in high-Alpine country