The Devoll hydropower project in Albania

Statkraft AS has built two hydropower stations on the River Devoll, some 70 km to the South-East of the Albanian capital of Tirana: Banjë and Moglicë. The two together will have a capacity of 256 MW and an annual production of around 729 GWh. The Banjë power station took three years to build and was put into operation in 2016; the Moglicë power station has now been commissioned in June 2020.

The power generated by the two hydropower stations is badly needed in order to meet the sharply increasing power consumption in Albania. On completion, Devoll Hydropower will increase the generation of renewable, clean power in Albania by 17 %. 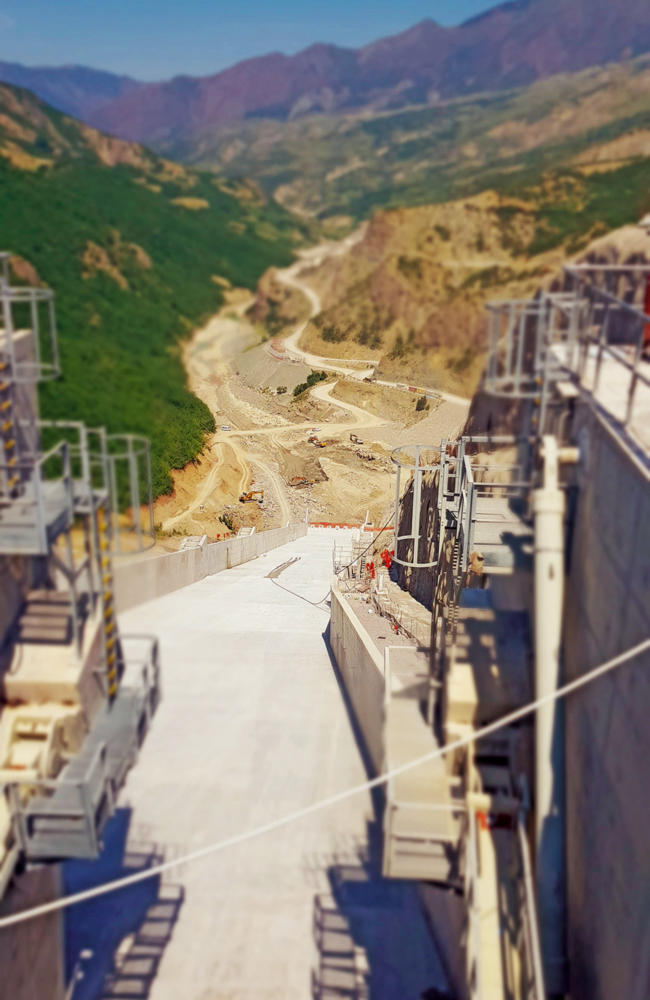 A view from the dam down to the emergency spillway.

The power station at Moglicë, with a height of 186 m, is the highest dam of this type in the world. A lake surface of 7.2 km² with a volume of 360 million m³ is being dammed. The water will be routed via a 10.7 km long headrace tunnel to the underground hydroelectric power station with two main Francis turbines from General Electric.

A third Francis turbine will operate via a piping section at the foot of the 186 m high barrage so as not to entirely cut off the water supply in the project area. In order to keep the impacts of the construction project on the environment as low as possible, an attempt was made to install a steel pipeline using the micro-tunnelling technique. Unfortunately, this attempt failed right at the starting pit because of the difficult and complicated geological conditions there. It was therefore decided, at short notice, to install the pipeline directly in the supply tunnel. This meant that the length of the DN 800 turbine pipeline increased to an overall length of 354 m, measured from the barrage wall to the turbine house.

The original plan to construct the pipeline using steel pipes was discarded not only due to the complex geological conditions but also because producing the welding seams was too expensive and would have taken too much time. Also, because of various changes of direction, a few pipe bends would have to be produced on the construction site.

In the search for alternatives and in order to solve the problems they were facing, the Turkish general contractor Limak turned to the Duktus company. What they were looking for was a pipe system with which the entire turbine pipeline could be constructed simply, safely and in highly restricted spaces. The safety factors had to be given priority and the changes of direction in the route needed to be secured with thrust blocks. Included among the selection criteria were, among other things, the possibility of vehicle impact protection and resistance to the earthquakes which can occur in this region. The decision went in favour of ductile iron pipes with the proven BLS® restrained pipe joints.

No compromises even under pressure

The Statkraft AS does not accept any compromise in the selection of pressure classes either. For the entire 354 m, pipes with wall thickness class K10 with BLS® restrained joints, suitable for PFA = 25 bars, were selected. The resulting pressure results from the geodetic height difference of 138 m. With a closing time of 6 seconds for the guide vanes at the turbine in the centre of the power station a theoretical pressure increase of 20.4 % is calculated; with an additional safety margin of 10 %, this results in a permissible component operating pressure (PFA) of 18.3 bars. For wall thickness class K10, the PFA = 25 bars.

The first-draft plans envisaged mounting the pipes on brackets. These would absorb any possible subsidence or landslides. Changes of direction along the pipeline route, which were originally planned with steel pipe bends, were now able to be dealt with easily and without problem with the ductile iron pipes and the use of plain ended pipe sections and standard fittings.

Construction site briefing and monitoring was attended by the application technology people from the Duktus company at the site in Albania. With the help of the briefing, the Limak assembly team was able to lay a pipe system, which was initially completely unfamiliar to them, to a quality level considered excellent by all participants.